Irina was 16years old in 2003. She had AIDS. Her hands, face and clothes were filthy as she spent most of her time scavenging through garbage to help support her single mother who also had AIDS and her siblings, one also with AIDS. She lived in a tiny shack with just three walls and a cardboard roof, along with 7 other people (see picture). Irina received medication to keep her healthy from a charity organisation in Belgium . When the medication ran out her sores would not heal. The hospital in Craiova would give her medication that did little to help.

The smell was terrible as the shacks were built right on the garbage dump. The air was toxic, thick and sticky due to the fact that there was always some garbage burning. Corpses of animals rot meters away from the crooked houses, where the children plaid. Around 130 lived on the garbage dump in Mofleni. 82 of them were children in 2003.

When it rained, the floors of the houses became mud. The rooms were full of flies and there was no electricity or running water. Rats were everywhere and rats bit many times children. Two children died in 2001 in an accident buried under trash .The houses built on the garbage dump were slowly sinking into the ground. Some of them grew pigs which were almost wild. The pigs eat from the garbage dump.

Irina died. So did her mother.

Most of the people that I knew there migrated to Italy starting in 2007. They live of garbage there as they did on Romania. Others took their place on the garbage dump in Mofleni dreaming that one day will also sort garbage in Italy.

There are lots of syringes are on the ground. Many children’s parents are drug addicted.  Sometimes they send their children to gather syringes for the periodical exchange syringes programs. Needles prick some of them during the process. Too many have hepatitis B or C. Rarely the illness will be detected in time. 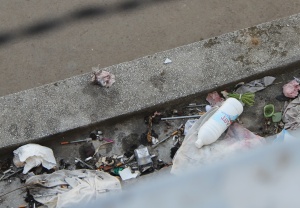 Many of the drug addicts are at a very high risk of HIV. Most probably in their majority they are HIV positives but they have never been tested. The number of overdose deaths has increased in the last years. Since the beginning of the year 5 of the people I knew including a 13 years old died of overdose. His brother died of overdose 4 years ago. The mother is left with just one child. He is 5. The probability for him to end up the same way is high; out of the 109 young adults ( between 21 and 23 years old) that I polled – 46  were addicted.

Sewage from one building leaks out in the street. Rats are common; so are the stray dogs.  During the summer the rats population explodes and there are cases of children being bitten by the big rats. There are two women washing their carpets on the street. Too many children are on the street – it is a school day – education it is rarely a priority for them or their families.

On the street close to the near by cemetery there are always 4-5 prostitutes waiting for their clients. Drug addiction and HIV among the prostitutes is more of the norm than the exception. Some of them make enough money to feed the addiction of their boyfriends and friends.

Two of them live in the shacks behind the big hot-water pipes near by.  There is one girl that lives on the pipes. Children call her the Owl – her big eyes, the uncanny way she walks on the pipes and her abilities to kill rats are the reasons why this nickname seems appropriate. She sleeps on the pipes inside a cement casing built to protect the pipes. The space between the pipe and the cement ceiling is around 40 cm.I had the feeling of looking into a grave. 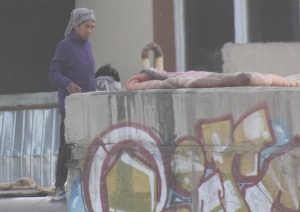 Most of the children, youth and adults in the ghetto are part of lost generations. Their choices are limited and their lives are Hobbesian -shorter, nastier and more violent than most of us could imagine. 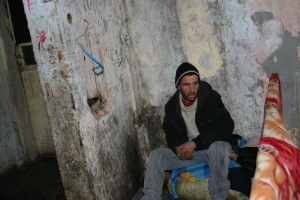 The chances are that a good number of the children will become him. He lives wherever he can. In the winter he lived on the 4th floor on the stairways of the building. He will do whatever he could to get his fix.

The children that are playing now in the dumpsters looking for toys will turn at best into old people that collect garbage for living. The cycle is simple, cynical and scary similar in all the ghettoes I know.

The ghettoes are exploding in numbers and everywhere I went the majority of those living in the ghettoes were children. These children could be part of a positive European future but due to hypocrisy, ineptitude and racism they more likely will become a European nightmare. Mofleni and Ferentari are more trends nowadays than exceptions. Many of these children will end up in ghettoes in Western Europe. Prostitution, begging, theft and garbage recycling will be the best options available for them there.

In the meantime in Brussels and elegant hotels and conference rooms all over Europe most of those that should bring about a change waste money and time on dreams and words that are meaningless for most of us who work in the ghettoes.

The EU Commissioner in charge of Roma issues (most of the children in ghettoes in Europe are Roma) has done nothing in the last 4 years since she is in charge besides strengthening a culture of shameless self-promotion and lip-service.

The national governments are not doing much better. A good part of the civil society has become a mirror of the institution they are supposed to force to reform. Experience is built on facebook , internet and emails while work at the grassroots has become “obsolete”.

Nightmares that explode into reality will for sure bring about dramatic reform due to enormous loses.

It is easy to avoid a crisis and improve the situation that but for that we need first to stop dreaming and confront the nightmarish reality in the ghettoes.