Martin Harris – UK ambassador to Romania and his mother came to visit the club at 136. They brought a one-meter Paralympics mascot with them – children were impressed. So was Edi, as he received a “get-well” card from Martin’s family. I never got any of those despite many injuries as a child – no nice Ambassadorial families around…life is never fair. Edi makes good use of the crutches and he is healing fine (read more about that at http://valeriucnicolae.wordpress.com/2012/09/17/14/ )

Martin talked to the new principal (we have a nice a helpful one nowadays) and let himself abused by the children. He wore the red (girls) tie of the school and listen to lots of stories. His mother is very good with the children too.

To make things a bit more exciting one of the new children (first grade) we have in the club threw up. The reaction of our guest was as normal as it could be – children throw up – part of life. He ate a bit too much and too fast and then ran up to the stair to be in time for the start of the class at the club. We did not let them help us with cleaning.

The event of the Ministry of Labour and National Agency for Sports at which we were invited was organized as well as everything is organized within the Romanian politics.

Basketball hoops were well placed on the “bicycles –only” lane in the park on probably one of the narrowest and most circulated alleys. Nobody seemed to be responsible for anything and the schedule we received for the events was as realistic as the political promises of our political leaders.

The guys in charge of organizing the football event seemed not only to have never done anything as such before but to have an amazing gift of making everything ten times more complicated.

Together with the grassroots manager at the Romanian Football Federation(FRF) – Adrian Pigulea- we decided that we will better do it ourselves and let the guys” in charge” deal with bringing water. They managed to do it after almost 2 hours when nobody needed it. We bought water ourselves. 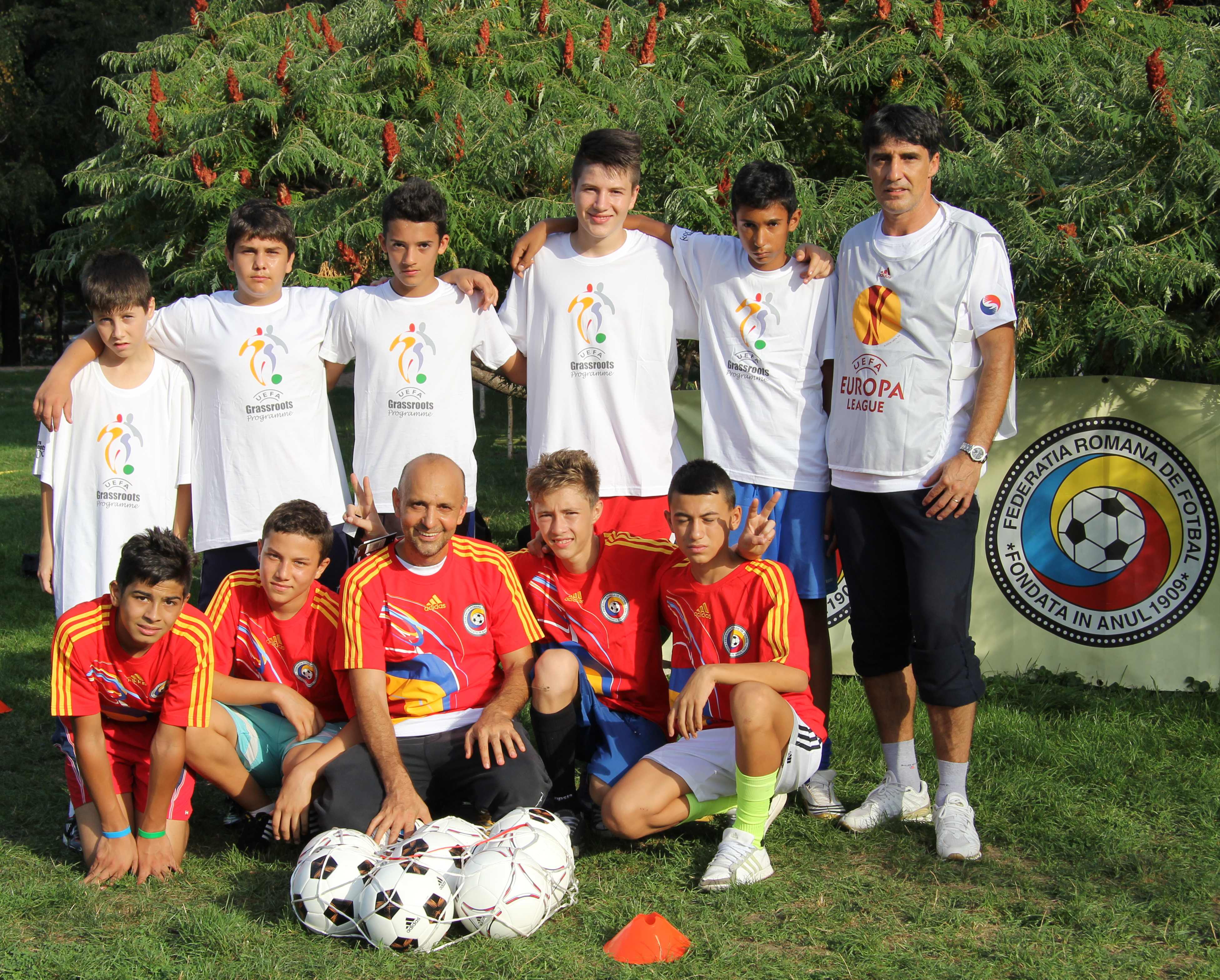 So we had to make up a football pitch, to choose the teams and to be the referees. Teams were dressed in the Romanian National T-shirts and UEFA’s T-shirt.

We had over 40 of our children in the park and together with the FRF and the help of UEFA (thanks William and Patrick) we made sure we sent a strong message against racism. We used a RESPECT ball but a hole in it forced us to use another one for half of the time.

United Against Racism T-shirts provided the most visible message in the Herastrau Park yesterday. More than 250 disadvantaged children took part in the event and thousands of people watched what happened.

Miodrag Belodedici and Daniel Prodan – some of the most recognizable ex-footballers in Romania joined us.  Belo wore the United Against Racism T-shirts during the entire time he was in the park and played a lot with some very happy children. Didi did more photos than playing and I am proud to say that at this moment I play better than him. Hopefully he will not read this as the 110 Kg defender might try to prove me wrong next time. It might get me a “get-well” wishing card from Martin. The two times European Champion Belodedici is still a tiny bit better but he is also a bit younger.

Not only the children were happy playing with Belo so was I. Most of the times as we lost 4 times out of 5 I played against Belo. A win is still a win and I did not have proper shoes and wore basketball shorts.

Children also danced and took a ride on the boat around the lake. It was for free and for most if not all of them the first time to do it.  In the morning we also took them to the Antipa museum (they accepted to let us bring the children for free).

All in all a very good day after a rather tense weak due to the racist incidents during the Steaua- Rapid game. ( if interested read more here http://valeriucnicolae.wordpress.com/2012/09/26/the-ugly-game/)