Last night the football game Steaua Bucharest – Rapid was once again full of racist incidents. Thousands chanted their hate against Roma. The lack of reaction of Romanian authorities remains a proof of both racism and stupidity. Today OSCE published in their latest booklet an article I wrote months ago…

For those ready to say that this is something normal with the football fans … there was a banner which thanked to Eugen Grigore. He is a serial killer that in the 1970s killed 24 Roma.

Kids, the ghetto and the magic of sports 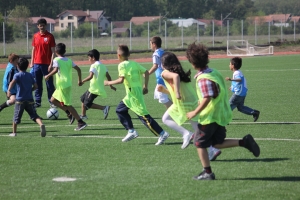 As a child I did lots of sports. I played football and basketball in some of the best teams in Craiova a town in the south of Romania I ran 800 meters and I was a decent swimmer and tennis player. For the poor Roma child I was, the state rations of sometimes-fresh meat, fruit and vegetables received by youngster playing sports was an extremely strong incentive during the Communist times when good food was a luxury. Hot showers, equipment as well as warm gyms and training camps were some other things I thought to be almost magical, especially during the cold winters or summer holidays.

But what I liked the most was that in my teams I never felt I was the stinky Gypsy most of the people around me said I was. I was just a good player and my teammates treated me with friendship and respect. Some of my stronger friendships created then remain strong after three decades. I learned most things I know about hard work, discipline, competitiveness, ambition and respect from sports. I believe my personal success was possible because of what I learned playing sports.

No wonder I focused on sports when I started working with ghetto children in Bucharest. Drugs, violence, prostitution and petty criminality infest the ghetto. Everybody, but everybody I talked with told me either that I was crazy to try to work there or that I had no chance whatsoever to have any positive impact. I asked a friend from the European football governing body UEFA to give me some T-shirts and I told the children in the ghetto that I was starting a UEFA-sponsored team. My colleagues and I at the Policy Centre organized street-dance, basketball and volleyball classes. The children got hooked. No drugs, no violence – just sports was our motto.

It is less than two years since we started working in the ghetto and we have some great results. Our children (around two hundred) stay in school – their attendance has improved dramatically. We have a national vice-champion in street-dance and very good football and street dance teams. None of our children abuses drugs. Our campaign against violence and racism is visible on stadiums throughout Romania. Banners with No Racism No Violence are nowadays compulsory for all first league teams.

Violence and racism in and around football stadiums are still a huge problem. The last game of the Romanian season at the end of May 2012 saw two teams from Bucharest, Rapid and Dinamo, playing for the Romanian Cup. I took my son to the game. At one point over 10,000 people in the stadium started to chant against the Rapid team – perceived in Romania as a team of Gypsies. “We’ve always hated the gypsies, f– you Rapid,” reverberated around the stadium. My child, a 10-year-old who loves sports, froze and started crying. He asked me if we were going to be killed. I tried to calm him down and I yelled at the people that were chanting around me. Some of them seemed thunderstruck and deeply ashamed. My child doesn’t want to watch football anymore. Words can kill not just innocence and love, they can kill people. Racism has been the motive for abject killings – some of those crimes have had sports people as victims.

Some of the most famous football, basketball and volleyball players in Romania have come to the ghetto and played with or trained the children we work with. The Romanian Football Federation(FRF) has done some positive things in the last years trying to stop racism and violence. We run together with the FRF twice a year tournaments against racism and violence for children and we play exhibition games with famous journalists and personalities promoting same type of messages.  UEFA has in the past years sent a very strong message against racism and violence in the stadiums. Stronger than any European government. UEFA’s president is the only visible European leading figure who has dared to say openly and bluntly that anti-Gypsyism is a problem that needs to be fought seriously.

I still believe sports are magic. But I have learned that magic is simply not enough to stop violence and racism. For that we need serious and constant campaigning, education and prevention. We need governments and inter-governmental institutions to step in and do what some sports bodies have already been doing for years. Recognizing that there is racism and violence in our societies and in sports is important, but only a first step. What we need most now is to fight against them, openly and efficiently. We all need to feel that we are playing in the same team.

Valeriu Nicolae is a Romanian Roma. He is the president and founder of the Policy Center for Roma and Minorities in Bucharest. The Centre won the 2012 UNICEF Sport for Education Beyond Sport Award for its work as well as a prize for Exceptional Contribution to the Romanian Civil Society at the 2012  Romanian Civil Gala   More information can be found at www.policycenter.eu.